← more from
Firebrand Records
Get fresh music recommendations delivered to your inbox every Friday.
We've updated our Terms of Use. You can review the changes here. 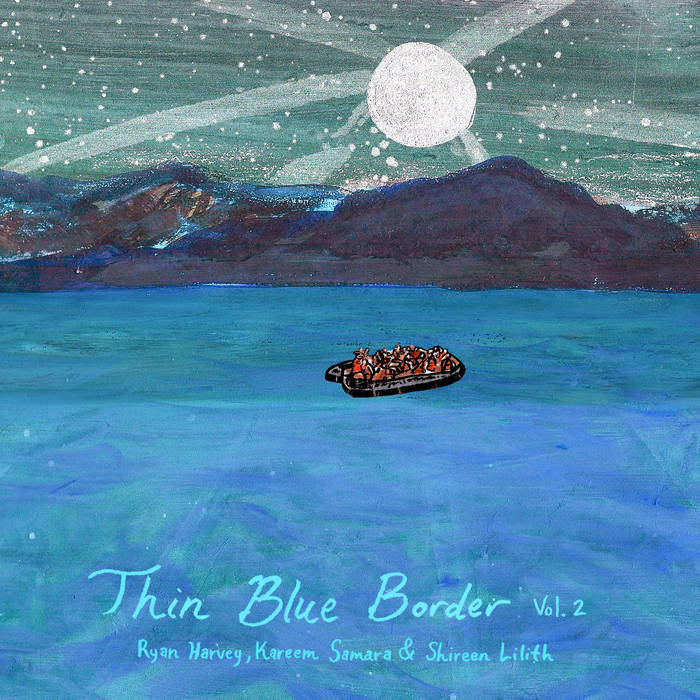 Thin Blue Border is the culmination of many years of writing, recording, traveling, and performing. The songs on the album, many of which discuss the lives of personal friends, are what they are because we live amongst people with amazing stories and significant strength.

The album’s title-track can be seen as a microcosm of the project as a whole; a somber yet energizing snapshot of not just today’s hard and often dim realities, but also the past’s. At once a story of an individual’s capacity to look forward, it also presents a kaleidoscopic view of humanity’s capacity to commit atrocity - or to struggle for justice under extreme conditions.

It’s lyrics were born inside a humbly-constructed rain shelter on a hillside in the Northeast corner of a small island called Lesvos, a gateway to Europe that sits a twelve-hour ferry ride away from Athens. Rolling cigarettes and chain-smoking as I jotted down lines, I would stop every fifteen minutes to pick up a pair of binoculars, point them towards the Turkish coast, and carefully scan the horizon.

It was the cold, wet February of 2016. I had come to Greece for the month to assist people - their belongings often packed into ziplock bags - arriving on crowded boats en route to the few countries who had offered them asylum and refuge. I had come with a few other American friends who had worked in grassroots disaster relief efforts, served as protest-medics, or organized political projects associated with the Middle East.

Almost one million people came to Europe in the year leading up to my arrival, with the majority making the crossing to Lesvos. 600 never reached Greek shores - they drowned in the Mytilini Strait, a strip of sea only a few miles wide that separates the island from Turkey.

Those who survived the trip may still be stuck on the island or the mainland, as they are cycled through an European asylum system plagued by racism, nationalism, pointless layers of bureaucracy, and the neoliberal austerity policies that have strangled countries like Greece. As we worked along the beaches, thousands of refugees were blockaded by riot-police and soldiers at the Macedonian border, and tensions mounted.

Often, these people fleeing state-violence had to fight pitched battles in their efforts to continue towards Germany. One day, a thousand of them went around the security forces through a nearby forest, crossing the border via the flooded and icy Suva Reka river. Two Afghan sisters - one was was pregnant - and one of their husbands drowned, and two dozen others had to be rescued. 700 from the group were sent back to Greece.

This was Greece in 2016, and it hasn’t changed much. In-camp riots have replaced the border fights, and ethnic tension encouraged by the harsh conditions inside government-mandated “hot spots” operating at many times their capacity have replaced the hope of reaching a country that will offer these brave people a sense of dignity.

In 2016, there was still a semblance that the hardest part of the journey was over.

The organization I volunteered with was a grassroots initiative founded in Kleio, one of many quiet little villages that were cast onto the frontlines of the largest refugee crisis since the Second World War. Our role was to patrol an isolated coastline stretching dozens of miles south of the village that other NGO’s weren’t covering. Its many cliffs and rocky points had hosted a number of dangerous landings in the dark of night, and some of those arriving had suffered frostbite.

Alongside our counterparts in the water - from the search & rescue organizations Sea-Watch and Proactiva - we monitored the Aegean Sea for black rubber dinghies and cheap fiberglass fishing boats, doing what we could to ensure safe passage for their passengers and acting as their first-responders on the land. Working through the nights and without adequate thermal equipment, we would listen carefully for the high-pitched whirring up a cheap dinghy motor or the struggling growl of an over-loaded fishing boat to detect arrivals.

With good daytime weather, we could take to any hillside on the island and look across the strait to Turkey. With decent binoculars, we’d watch cars zooming by, see hotels opening for breakfast, and catch the flicker of early morning house lights turning on. Sometimes, we might also spot the blurry twilight orange of life-jackets.

In the middle of the Mytilini Strait is an invisible border, made real by the presence of an international coalition of military and police forces patrolling its edges. It separates a part of the world that is bombed regularly from one that isn't; Europe on one side, the Middle East on the other.

Elders on Lesvos could recall how only a century ago, some of their own families had taken crowded boats across the strait to escape the ethnic cleansing that accompanied the formation of modern Turkey. For hundreds of years, Greece had “looked South and East” rather than North and West, and until 1912, the villagers of Lesvos lived in the Middle East. As the First World War came to its bloody, fateful conclusion and the Ottoman Empire collapse behind them, 800,000 ethnic Greeks - a number nearly identical to the country's 2015 refugee arrivals - fled their homes in Anatolia, crossed the Aegean Sea, and became European.

My team would observe this same strip of water as the Turkish Coast Guard, British Navy, the Greek Navy, Coast Guard and police, Frontex (the EU’s border patrol) vessels from Portugal, Norway, Spain, and Greece, and massive NATO warships patrolled it. Sometimes, we would see them engaging in acts of violence against refugees. Other times, we’d seen them sitting idle as boats passed them by.

The first arrival I assisted with was a group of young people from Afghanistan. It was 3:00 in the morning, and they were soaking wet as a result of the Turkish Coast Guard attacking them with hoses - a punishment for not paying them the proper bribe. They had come mostly on foot to this point, walking through the Iranian mountains and across Turkey to find a new smuggler to take them across the water.

On another shift, I watched in broad daylight as a rubber boat packed with people slipped right between two Turkish Coast Guard vessels. According to Turkey, the Coast Guard couldn’t handle the amount of boats entering their waters, so some got through. In reality, it was about money, and those who didn’t pay were more likely to be denied the crossing - or sunk in the process.

On our side, helping to ensure safe passage for these people, were rescue boats and a vast network of land-based infrastructure maintained by volunteers from Europe, Mexico, the U.S., Iraq, Ukraine, Iceland, and beyond. Anarchists from Athens and aid-workers from France collaborated to maintain shelters, and a pair of Syrian sisters and a crew of search & rescue volunteers from Norway and Spain were facing prison time for saving lives at sea (the Syrians still are).

Journalists were there too, trying to document the tragic stories being carried across the sea while their opportunistic counterparts scoured the beaches for pictures of sad, homeless children. One of them, a British reporter from Rupert Murdock’s Sky News, walked up and down a line of newly arrived refugees one morning with her cameraman. When she heard me speaking English with a group of young Kurds from Kobane, one of whom had fought with the YPG and was shot when ISIS stormed the city, she interrupted in privileged desperation; “I need to speak to a Syrian! Can you find me a Syrian?! Are you Syrian?”

Behind the Chinese-manufactured rubber dinghies and second-hand Turkish fishing boats emerging from the coastline were mafias, smugglers, and criminal networks hailing from across Western and Eastern Europe, the Balkans, the Middle East, and North Africa. They collaborated to maintain the routes, methods, financing, and contacts needed to sustain the billions of dollar a year refugee transportation industry. A friend who had fled Syria tried to cross in another section of Turkey and met some of them. His boat was intercepted by a ship which off-loaded a dinghy full of masked men with machine guns. The men destroyed the refugee dinghy’s motor and sliced the sides of it with a knife.

Refugees who spent thousands of Euros to access this network were often left with little else afterwards. They came largely from Afghanistan, Syria, and Iraq, but many were fleeing lesser-publicized wars or situations of violent repression in Pakistan, Western China, Iran, Palestine, and across the African Sahel and Maghreb.

In Syria, a brutal regime backed by Russian and Iranian forces fought a homegrown revolution and armed-revolt that had come to be dominated by outside forces after Turkish, Saudi, Emirati, American, and European money and weapons began pouring in. Soon, the Islamic State rode over the border in brand new American military vehicles stolen during their swift seizure of Northern Iraq’s major cities - a situation made possible by both the American occupation and the new government’s bloody, sectarian policies.

In Afghanistan, a coalition of 60 countries led by the U.S. and NATO fought an endless war against an enemy backed by elements of the Pakistani military and intelligence community. The Taliban had taken shape in the aftermath of a previous war, one in which the Soviet Army had occupied the country.

Then too, the country had been used as a battlefield for larger powers to contest global and regional hegemony. For Afghanistan, it was a familiar history, one that echoed Britain’s unwinnable wars of the late 1800’s. The Soviet invasion inaugurated four decades of conflict that has yet to cease.

This history struck me as I sat on that hillside; half the world had ended up there, in the Mytilini Strait. Most had come to escape - others to exploit - conditions created by contemporary wars deeply embedded in the colonial histories of Africa and the Middle East. Others still, like me, had come to support and show solidarity with those crossing the sea, to try to make right from the wrongs the governments we lived under had committed in our names.

The first two verses paint a picture of that hillside, but they were also inspired by interviews I conducted with friends who had crossed the Aegean the previous year. They had participated in the early days of the revolution and had fled Syria as the war began to overshadow it. I wrote a lengthy article about them as I wrote the song, and it was published by the Syrian revolutionary blog al-Jumhuriya.

The second half of the song tries to place their story, and the stories of so many other refugees, in the historic context of a rapidly changing balance of global power. The chess board shifts relentlessly now, as it has before. The grandparents of Ottoman Lesvos lived in similar times.

I finished the lyrics in the hillside shelter, and wrote the music when I got back to the village. The chords came almost instinctively, as if the song had already been written. Perhaps it is telling then, given the scope of the story behind Thin Blue Border, that the village was named for the the Ancient Greek goddess Kleio, the muse of history.

Mille Petrozza stops by to talk about the new Kreator album, plus music by Trauma Bond